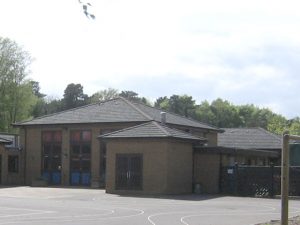 Mundford Primary School opened as an all age school in 1866. It was built for the children of the village by Mrs L.Y. Stephens of Lynford Hall, who was Lady of the Manor at the time. The school took pupils from Lynford, Cranwich and Mundford. (At that time, West Tofts and Ickburgh had their own schools.) Lessons were held in the two original rooms of the old school building (now The Old School House Motel) under the headship of Mrs E. Cornell, who was Headteacher until April 1900. A new classroom block was built in 1951. This building originally provided two classrooms with a third being added at a later date.

Between 1988 and 1989, the school was extended and re-modelled. Two additional classrooms (making five classrooms in total) the hall, kitchen, offices and staff room were added. However, even at this time, pupil numbers were rising steadily and despite staff pleas (to the, then, Local Education Authority) to have a sixth classroom built, this was not deemed necessary, so the extended school re-opened with the sixth class being housed in a mobile classroom.

During the academic year 2001/02 the school was extended again to provide an information room, resources and group room. This extension was necessary in order to fulfil Government Targets for computer provision per pupil by 2002. February 2006 saw the completion of yet another building project, this time to provide a new classroom (to replace the mobile classroom) and outdoor learning areas for Reception and Year 1 pupils. As a result of this latest building project, we have also restructured part of the school site to include a large greenhouse.

Mundford School now has excellent facilities, for a school of its size, and occupies a very attractive site, on the edge of Thetford Forest. There is ample space for children to play and to accommodate sports of all kinds.

Mundford School, in recognising its historic foundation, will preserve and develop the religious character in accordance with the principles of the Church of England at parish and diocesan level. The school offers pupils opportunities to explore the truths of the Christian faith, to develop spiritually and morally and to have a basis for choice about Christian commitment. It is also a place where the beliefs and practices of other faiths and no faith are recognised and respected.